We are well into 2013 now, and the Lucky 13s have been steadily launching their books into the world. But today, there is one last Apocalypsies debut.

Bridget Zinn was a member of the Apocalypsies -- her picture is there on our "Who We Are" page, her happy face smiling out from under a large, rainbow umbrella. Unfortunately, Bridget died in 2011 at the age of 33, and her debut novel is debuting today without her. 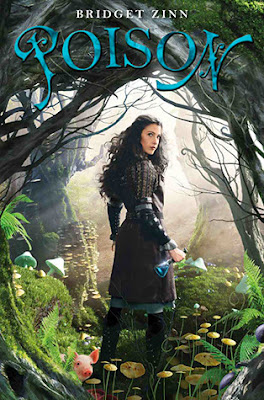 Sixteen-year-old Kyra, a highly-skilled potions master, is the only one who knows her kingdom is on the verge of destruction—which means she's the only one who can save it. Faced with no other choice, Kyra decides to do what she does best: poison the kingdom's future ruler, who also happens to be her former best friend.

But, for the first time ever, her poisoned dart…misses.

Now a fugitive instead of a hero, Kyra is caught in a game of hide-and-seek with the king's army and her potioner ex-boyfriend, Hal. At least she's not alone. She's armed with her vital potions, a too-cute pig, and Fred, the charming adventurer she can't stop thinking about. Kyra is determined to get herself a second chance (at murder), but will she be able to find and defeat the princess before Hal and the army find her?

Kyra is not your typical murderer, and she's certainly no damsel-in-distress—she's the lovable and quick-witted hero of this romantic novel that has all the right ingredients to make teen girls swoon.


Bridget was an amazing person, and her spirit and her story have touched many people.  Some of her fellow Apocalypsies are helping to spread the word and celebrate the release of her debut novel Poison:


In addition to our posts, there is an ongoing blog tour for Poison, and a number of online and in person celebrations being planned. You can learn the latest events and news at Bridget's website.

And please feel free to help spread the word on Facebook, Tumblr, and Twitter (hashtag #Poison) to join in the celebration of Bridget and the release of Poison.